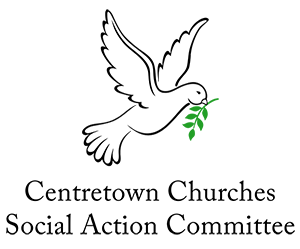 Uniting Christians of all denominations through joint participation in social projects and prayer.

Serving the citizens of Ottawa since 1967

The CCSAC Board of Directors recently approved a community outreach framework that focuses on four priority areas identified as urgent in Central Ottawa: lack of affordable housing, food insecurity, income insecurity and social isolation. Our outreach activities will include research and education in areas of social injustice, networking with other organizations that share our goals and funding specific projects.

With its continuing efforts to be better connected with others working in the community, CCSAC has launched a Speaker Series by inviting occasional guest speakers to join our monthly Zoom meetings.  Over the past year, we  have welcomed Michael Hatfield who spoke on measuring Canadian poverty; film-maker Danielle Rolfe who spoke about Soul Space, an initiative to support health care workers serving vulnerable people in the community; and in December Kaite Burkholder, the executive director of the Alliance to End Homelessness, Ottawa, who spoke on measures to address the affordable housing crisis in Ottawa.

Further details can be found under News on this website.

By The Community Outreach Committee

Early in 2022, members of the CCSAC board and Food Centre Management Committee joined representatives from volunteer organizations, academics, community leaders and people with lived experience of low income from across Canada in virtual meetings to discuss ways to achieve further success in reducing poverty in Canada. The consultations were initiated by the National Advisory Council on Poverty (the Council).

The Council was created in 2019 as part of a Canadian Poverty Reduction Strategy that set out specific goals and called for annual progress reports. CCSAC submitted a brief to the original consultations on creating such a strategy, noting the distinctive needs of those living on limited incomes in urban areas.

Each of the 2022 virtual sessions included over 100 participants offering a wide range of experience and views. However, several common themes emerged, for example:

Reflections from these national consultations will be included in the 2022 report of the National Advisory Council on Poverty that will be issued early in 2023.

A Voice For the City’s Vulnerable

CCSAC continues to urge the City of Ottawa to make adequate provision for vulnerable populations living in the central part of the city, especially during the pandemic-related lockdown when so many public buildings and private businesses have limited access. In particular, we noted the lack of accessible hygiene facilities and the need for respite and cooling centres during heat waves and warm accommodation during severe cold spells.

In January, Allison Dingle, Chair of CCSAC’s Centretown Emergency Food Centre Management Committee, and Lorraine Salvo, President of the Dalhousie Food Cupboard, met with City of Ottawa Councillors Catherine McKenney, Shawn Menard and Jeff Leiper to express our concerns regarding the Five-Year (Renewable) Sustainability Funding grants announced in September. The letter to the councillors noted that the allocation decisions left out the two food centres serving the downtown core of Ottawa. Although both food centres fundraise from their respective communities, the municipal sustainability funding has been key in the past because of its predictability. We noted that the loss of this stable financial backing will hinder our organizations’ abilities to work towards our shared goal of alleviating food insecurity in our city. We ask that the city consider replacing an “all or nothing” five-year funding cycle with staggered three-year funding cycles.

CCSAC congratulated Yasir Naqvi on his recent election to the Parliament of Canada, representing Ottawa Centre which includes the CCSAC catchment area. We pointed out to Mr. Naqvi our primary areas of concern – food insecurity, the lack of deeply affordable housing, limited resources to treat addiction and mental illness, and social exclusion, especially among an aging population. We expressed our support for Bill C-35, introduced in the last sitting of Parliament, that aimed to reduce poverty by establishing a national disability benefit and our hope that a similar bill might be introduced into the current Parliament.

Access to Transit Important for Those on Limited Incomes

CCSAC has signed on as one of the 80+ organizations supporting the provision of permanent free transit in Ottawa for recipients of Ontario Works and Ontario Disability Support Payments. Although members of both groups qualify for reduced fares, they must still pay a disproportionate amount of their limited monthly income to use the public transit that is necessary to enable medical appointments, food shopping and employment. 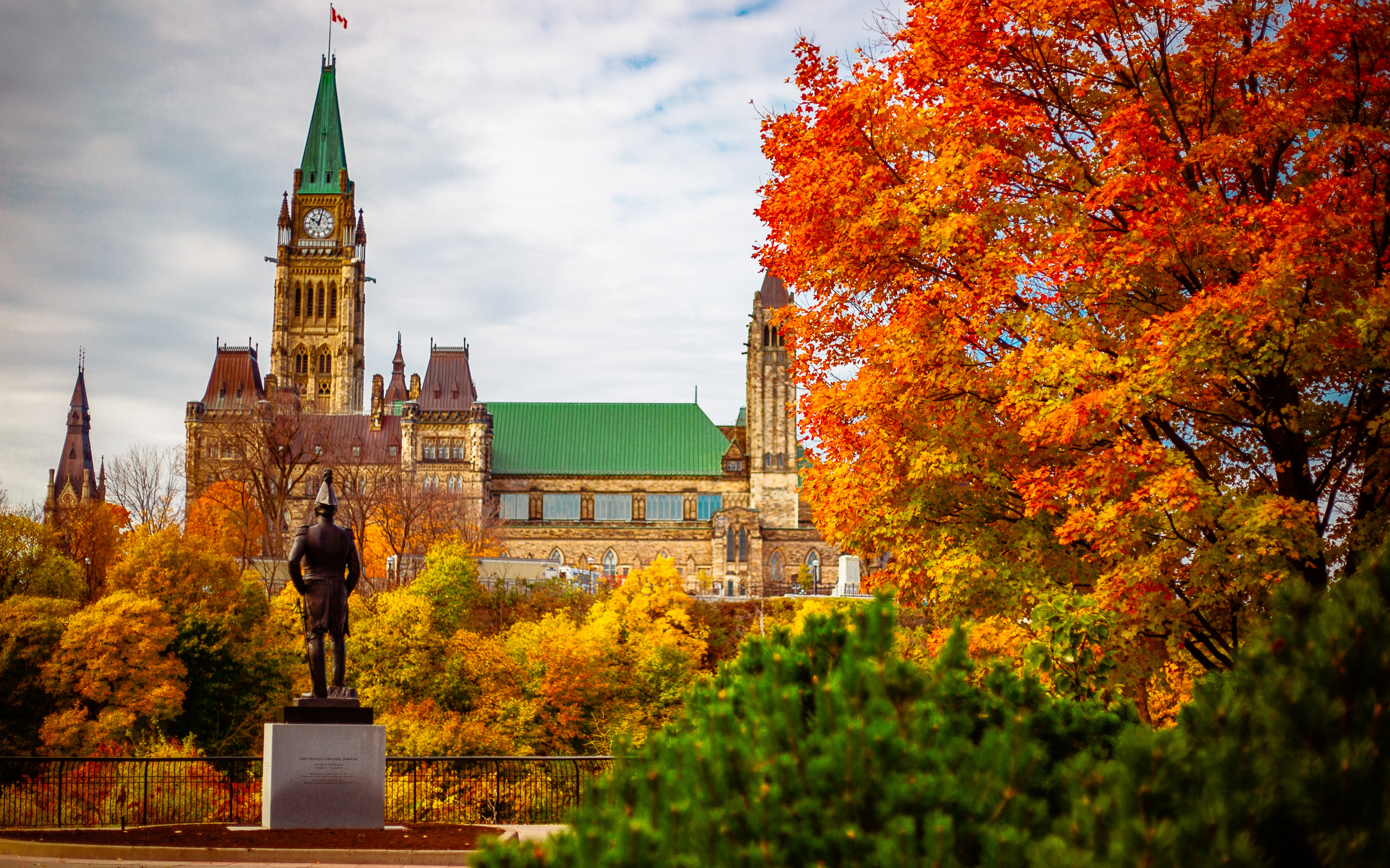 CCSAC is a member of the Centretown Neighbourhood Community Development Planning Table that brings together organizations based in Ottawa’s core to work on building a healthier community. The Planning Table has kept active during the pandemic lockdown to ensure basic services are offered to the vulnerable population living in Centretown.

Meal programs were expanded, and shelter hours extended to give area residents a safe and cool place to rest. As Ottawa begins to emerge from extended lockdown, the Planning Table members are working toward a phased restoration of established services and new medium-to-longer term projects for community development. 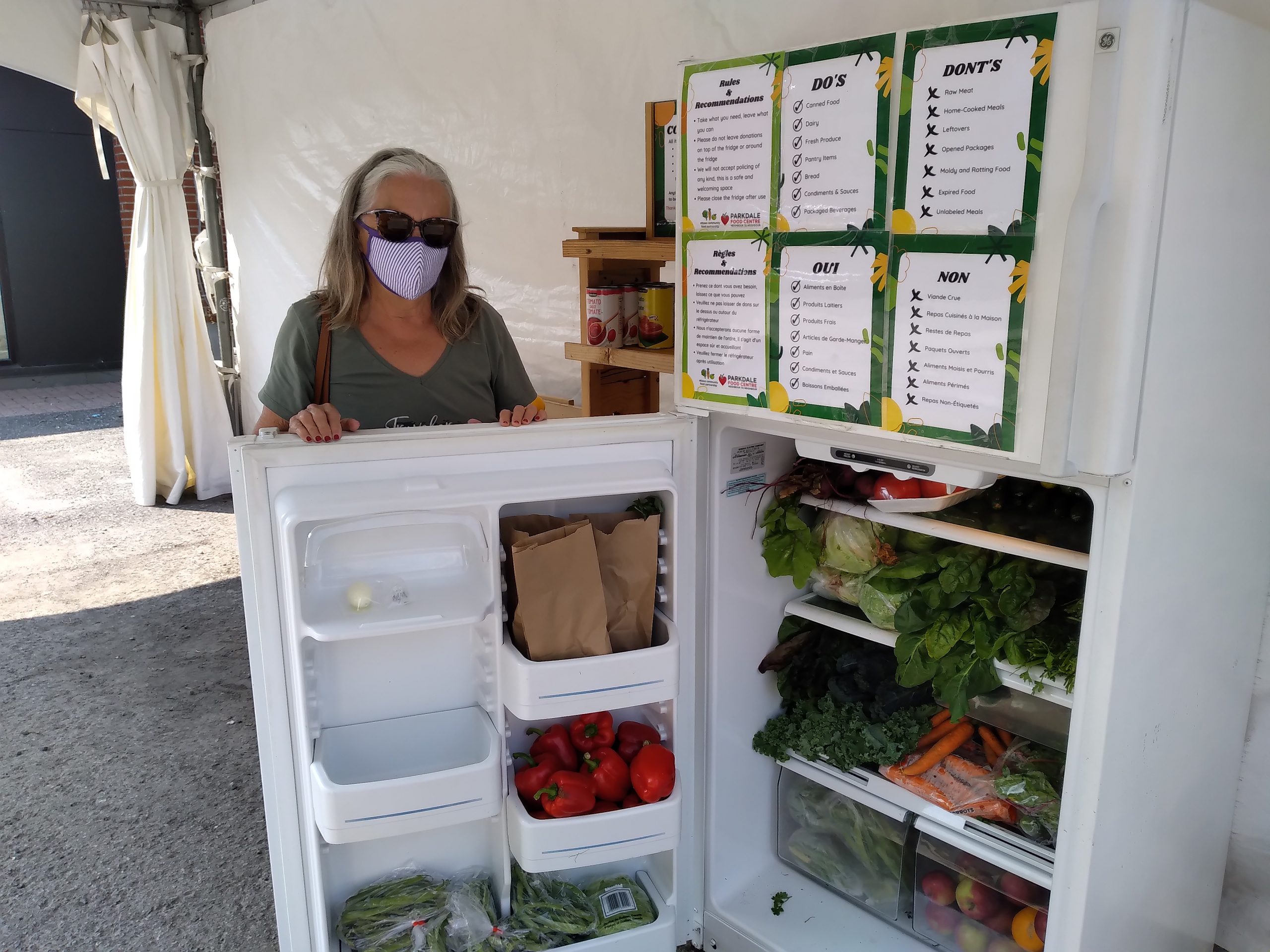 The community fridge movement is spreading throughout North America as a way to reduce waste while helping neighbours extend their grocery budgets and add fresh, nutritious food to their diets. CCSAC Board representative Susan Palmai and members of the Glebe St. James United congregation are spearheading an effort to install a community fridge in the downtown core. This is a project which exemplifies what can be accomplished working in partnership. Ottawa Community Housing has offered space for Centretown’s first community fridge and pantry at 415 Maclaren Street. A fridge has been donated by Arlington Five coffee shop, and Masters degree students from Carleton University’s School of Architecture are donating their time and providing supplies to construct a shed that will house the fridge. Community members will be encouraged to support the fridge which is to be called Public Foods. 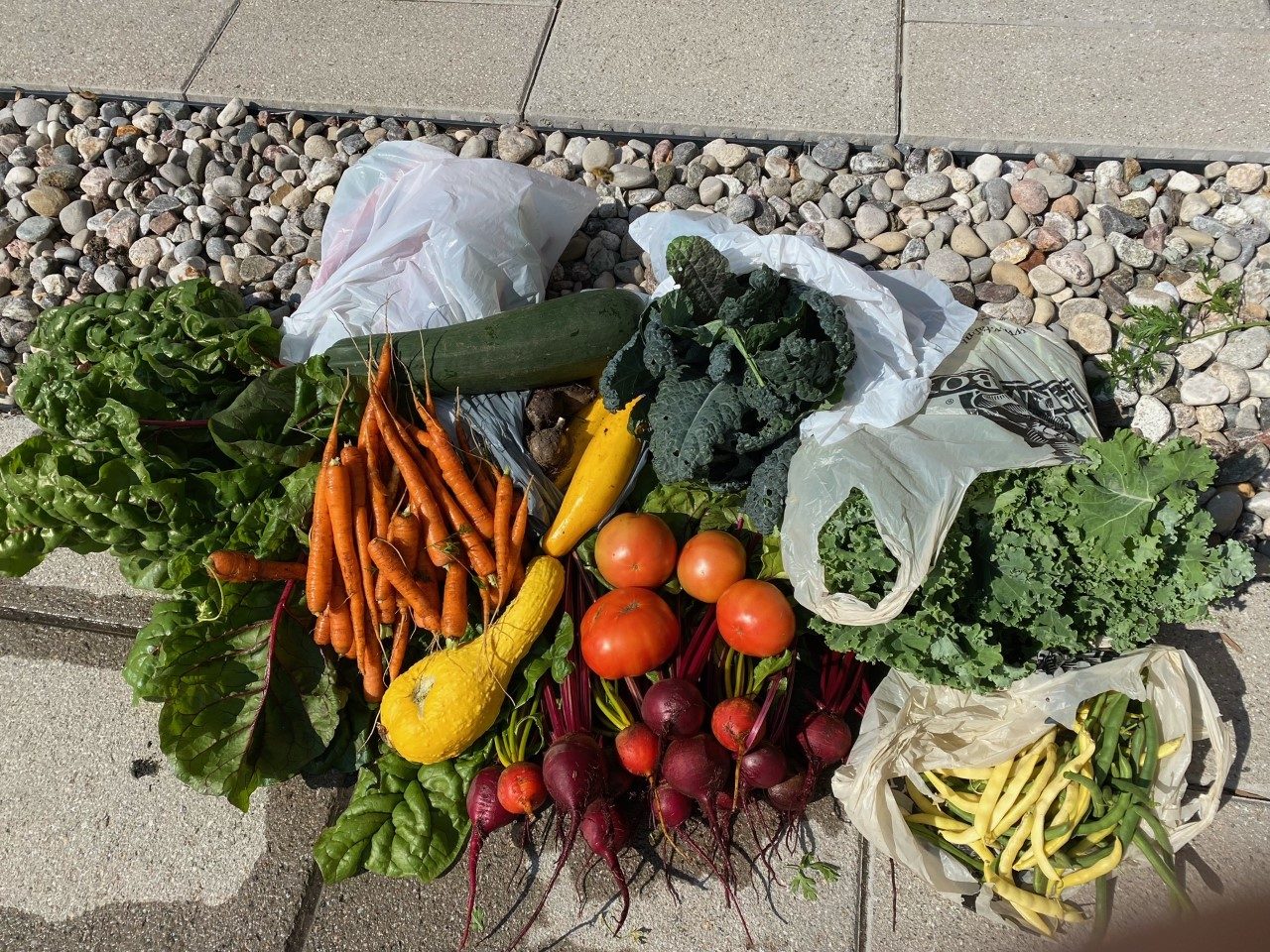 Ottawa East Community Gardeners have been making regular deliveries of beautiful fresh produce to the Centretown Emergency Good Centre. The vegetables, already cleaned and packaged when delivered, offer CEFC clients a nutritious addition to their diet. CCSAC thanks these dedicated gardeners! 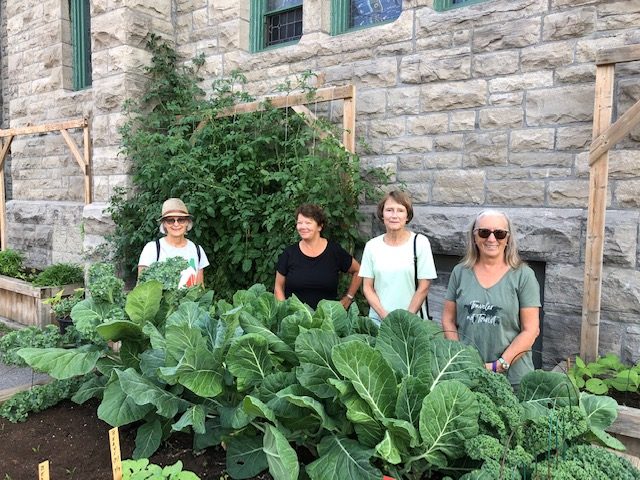 For several years, gardeners grew vegetables at Centretown United Church and supplied Centre 507 with fresh produce for their soups, sandwiches and salads – that was until the Pandemic of 2020! Given stringent health regulations, it was decided to plant flowers and forgo vegetables for 2020.

In 2021, volunteers from the Central Ottawa Cluster of the United Church (Centretown UC, Glebe St. James UC, First United, Kitchissippi UC, St. Paul’s Eastern UC and Dominion Chalmers UC), and CCSAC brought back the vegetables. A roster of volunteers weed and water daily. Work is co-ordinated with the cooks of Centre 507 so that bi-weekly harvesting is donated at a time when the cooks can use the bounty. There were actually more volunteers than could be accommodated – a lovely problem to have! This prompted a sister garden on the grounds of Glebe St. James United Church to enhance donations to Centre 507.

Neighbours stop by and ask questions about the garden and signs welcome them to go into Centre 507 to share the bounty. Although it was a challenge to operate during COVID, it is hoped to continue in the future.

Following up on last winter’s project to provide sleeping bags to drop-in centres for distribution to those in need, CCSAC began the summer supplying health and hygiene products to The Haven Too youth shelter and Centre 507 and Ottawa Innercity Ministries. During the pandemic lockdown, many public spaces are closed, and people who are inadequately housed have few places to shelter from Ottawa’s sweltering summers. We are pleased to work with organizations that offer respite and hospitality to vulnerable populations 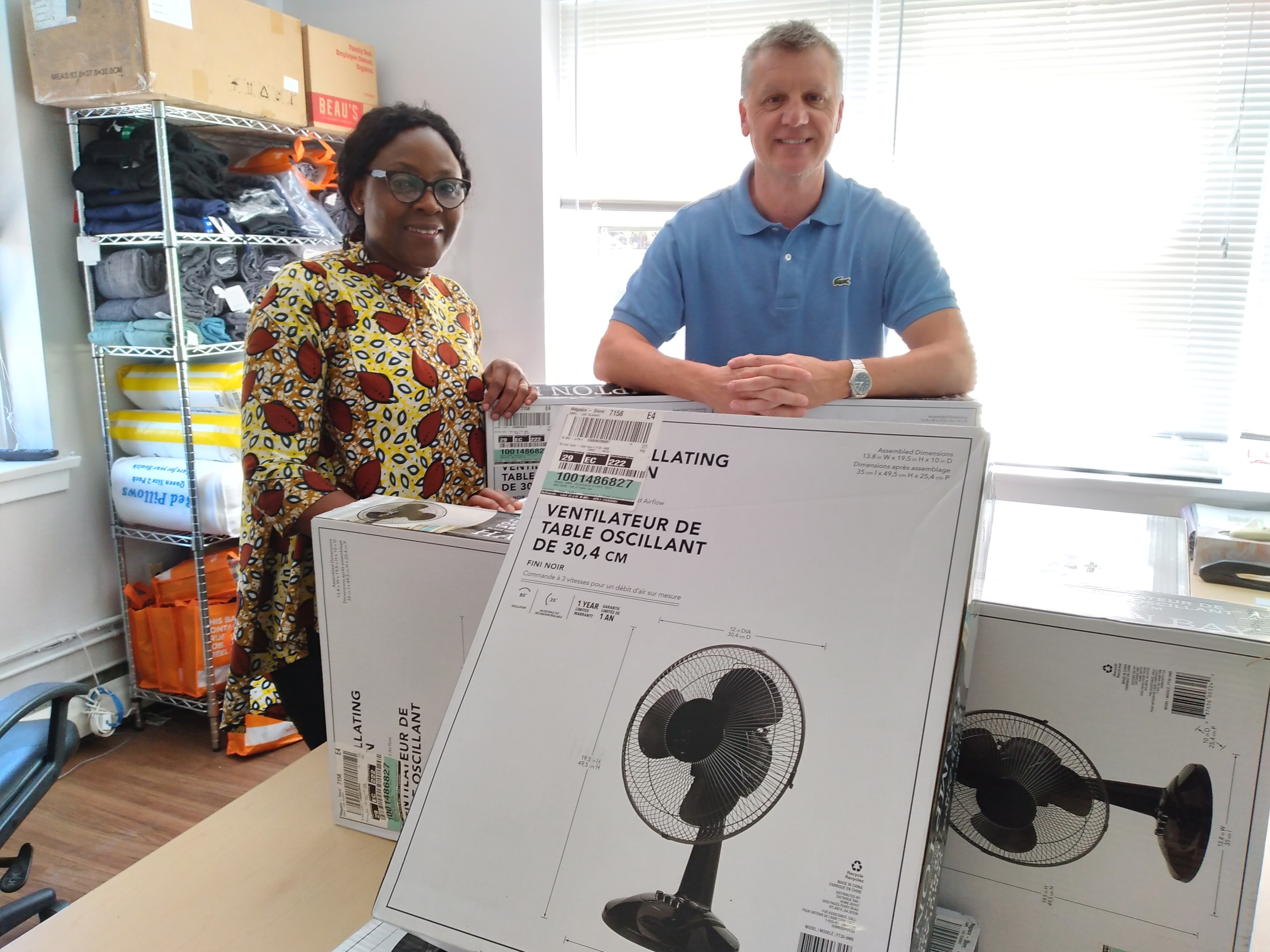 Following on the success of last year’s Health and Hygiene Project, CCSAC is again finding ways to help local residents cope with Ottawa’s steamy summer weather.  The projects are varied and intended to help local agencies support Central Ottawa residents.  CCSAC is sponsoring a summer outing for participants at The Well, a women’s day program, supporting a street outreach project at Ottawa InnerCity Ministries and providing care packages for youth attending The Haven and The Haven Too.

CCSAC also recently provided tabletop fans to help residents of Daybreak Housing keep cool during heat waves (pictured).  Cornerstone provides supportive housing for women at five locations in Ottawa.  Since 1982, Daybreak Housing has been a place to call home for men and women who have difficulty finding affordable housing and also struggle with issues such as mental health, recovery from addiction, escaping abusive situations and limited life skills.  Tabletop fans will also be provided to Cornerstone Housing, a women’s supportive residential program with several houses in the Centretown area. 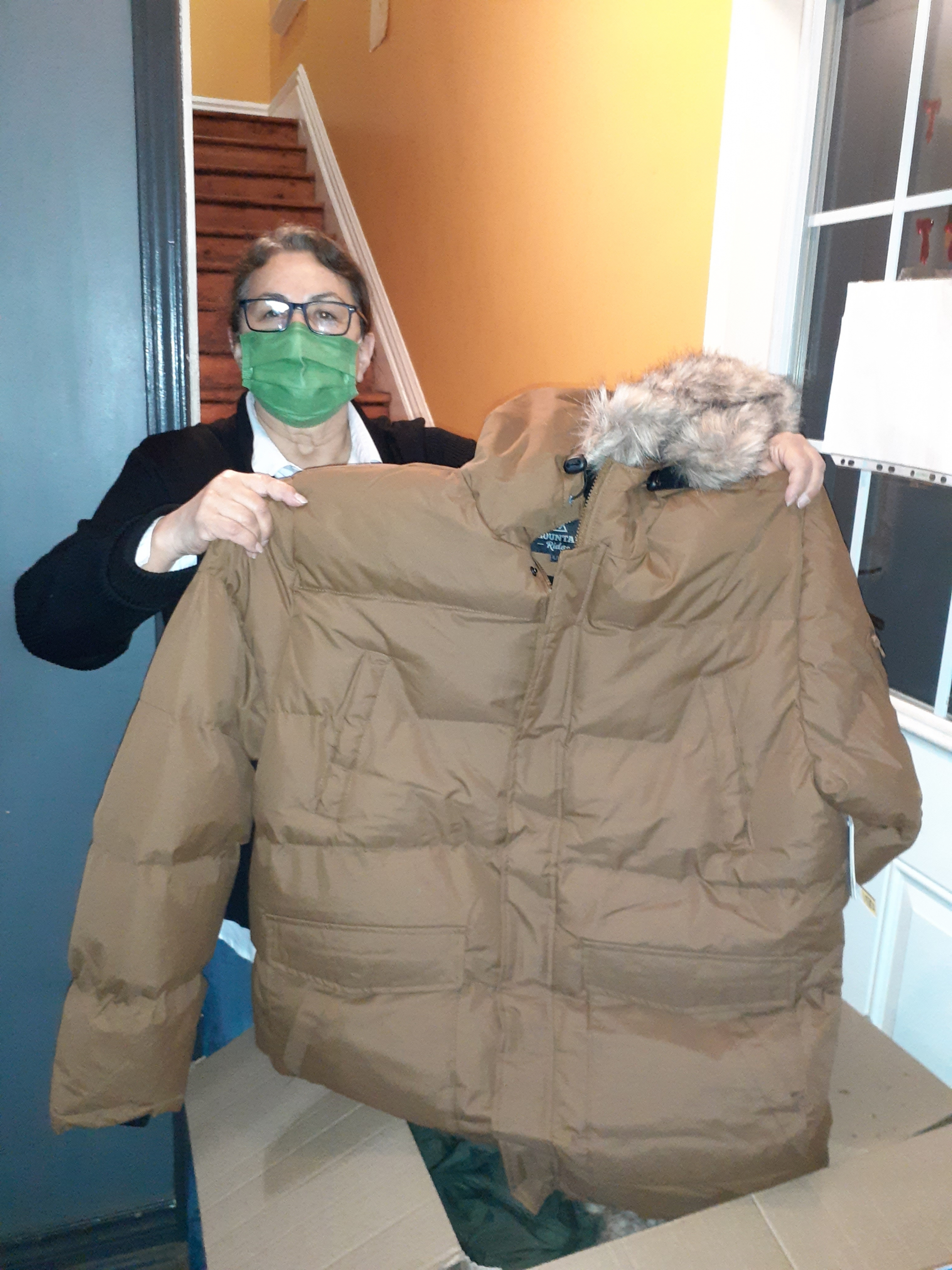 Winter is a difficult time for those experiencing homelessness, and it has been particularly hard for them during the pandemic when many shelters and day programs have had to limit their hours of operation and the number of clients they can serve. Far too many vulnerable people must spend much of their day outside, even on the coldest days. Following on last winter’s project to provide sleeping bags for some of the unsheltered members of our community, this year CCSAC funded the purchase of warm winter jackets to provide a little comfort for some of the men and women who visit the Odawa Native Friendship Centre. We are grateful to the Reverend Teresa Burnett-Cole and Susan Palmai of Glebe St. James for putting us in contact with Odawa. We also extend our appreciation for the staff of Giant Tiger on St. Laurent Avenue who helped with the selection of coats and whose discount made our shopping funds go further.

Experience The Benefits of Volunteering:

Are you ready to create a win-win from volunteering? CCSAC is a wonderful organization in which to find opportunities for yourself and others. We sometimes need help with fund raising, food drives, marketing and administration.  In non-COVID years, we need volunteers to help with our in-person Walk for the Centre walkathon.  Fill out our quick and easy application and we will get back to you if we need your help.

A Difference You Can Count!

Get all the latest’s news on our organization right to your inbox. You can unsubscribe at anytime and we never share your email address with anyone. 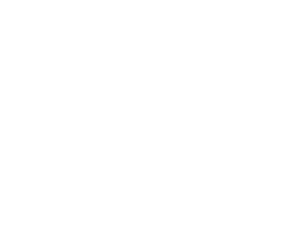 “Always be a little kinder than necessary” –  James M. Barrie